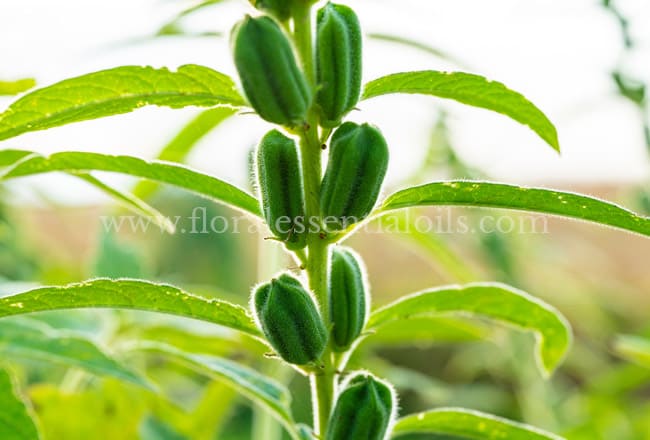 The sesame plant originated from the tropical regions of the East Indies but is now grown worldwide. It has been cultivated and was highly regarded by the ancients for thousands of years — it was one of the plants placed in Tutankhamen’s tomb.

In ancient Egypt the seeds were ground to produce a flour and today they are widely ground into the well-known paste ‘tahini’. If sesame and honey are mixed together the result is the delicious ‘halva’ which the women of ancient Babylon believed helped them to retain both their beauty and their youth.

The oil is obtained by cold pressing the seeds which contain up to 55 per cent oil. It should be a clear pale yellow colour as the bleached sesame oil is not suitable for aromatherapy. Sesame oil is almost odourless which again makes it acceptable as a carrier oil. The oil is rich in vitamin A, B and E as well as in minerals such as calcium and phosphorus - vitamin E gives the oil excellent keeping qualities.

Sesame oil is a popular oil in India and is used in Ayurvedic medicine extensively. It is thought to prevent the hair from turning grey.

Sesame oil may be used 100 percent but it is usually added to a carrier oil.

Reaction is very unlikely to occur but take care with highly sensitive skin.