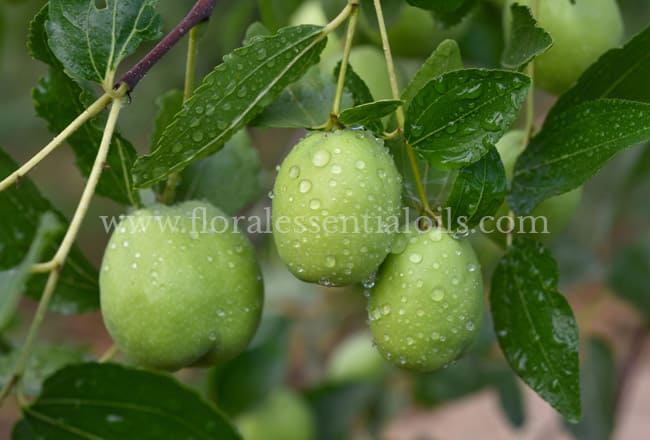 This plant grows in the desert regions of Southern California, Arizona and Northwest Mexico. It can be planted to save arid land from becoming desert.

Jojoba is not really an oil but is rather a liquid wax. It is extracted from the crushed seeds and is made up of esters formed from long chain fatty acids and long chain fatty alcohols. Another constituent is myristic acid which is an anti-inflammatory agent. The oil was discovered to have the same properties as sperm whale oil and has taken its place in the cosmetics industry since the whale became an endangered species.

It is a golden oil which is very stable and as it does not oxidize, it does not become rancid and has a very long shelf-life. If jojoba oil is left in a very cold place it will solidify, but will very rapidly liquefy when brought back to room temperature. It has a faint, slightly sweet aroma and a wonderful texture. Jojoba is used in creams, lotions and lipsticks.

Jojoba is usually added in up to a 10 percent dilution as it is more expensive than some other base oils. However, it may be used 100 percent on small areas. Jojoba makes a wonderful facial oil which can be compared favourably with any expensive cream.

A safe carrier oil which I have never seen any reactions to but allergic reactions have been rarely reported.